A Brief History of Hypnosis 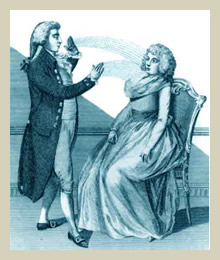 The first written traces of the use of  « altered states of consciousness » go back to 6000 years ago in Mesopotamia.  And you can easily observe trance (aka, hypnosis) in action in the various rites and ceremonies of indigenous cultures throughout history, even in some of the more advanced cultures such as the Greeks and Egyptians.

Until 1841, hypnosis was still considered to be a sort of invisible force referred to as « animal magnetism ».  Dr. James Braid, a Scottish surgeon, after serious scientific study, re-baptized the phenomenon as « hypnosis » and described it as a sort of communication between patient and therapist.  At the same time, its properties became well-used and respected in the domaine of anesthesia.

In 1891, the term « psychotherapy » was born thanks to the doctor Hippolyte Bernheim, which meant « treatment by hypnotic suggestion ».

I am not going to go into great detail here because you can find the rich history of hypnosis in many other places.

Let it suffice to say that hypnosis continued to develop in Europe throughout the 1800s, principally in the domain of psychological treatment.  Its use as an anesthetic slowly passed out of fashion the with the development of chemical substances which could do the job in a shorter amount of time.  And at some point, Freudian psychoanalysis became exceedingly popular and effectively supplanted hypnosis as a treatment for psychological ills.

It wasn’t until the 1920’s that an American psychiatrist, Milton H. Erickson (aka, the « Wizard ») would  resurrect hypnosis from the domain of stage hypnotists and restore it to its rightful place as a highly effective form of psychotherapy.  Erickson’s work and studies are legendary.  Modeled by the School of Palo Alto and the founders of Neurolinguistic Programming (Richard Bandler and John Grinder) they would continue to develop…giving rise to the more contemporary methods found in the New Hypnosis movement of Daniel L. Araoz, and later, evolving into the still newer form of Humanist Hypnosis thanks to the work of Oliver Lockert.

For more information, read in the FAQ section, « is hypnosis a natural state ? »